The data on this page is supplied from multiple sources consolidated at KarensPropertySearch.com and other internet sources. Whether you’re a buyer or seller, the knowledge you gain will help put you in control of your real estate transactions.

Call or email anytime to discuss how this information can benefit you or if you are looking for Astoria homes for sale or looking to sell a home in Astoria.

Located in the northwestern corner of the Queens, Astoria is bounded by the East River and is adjacent to three other Queens neighborhoods: Long Island City, Sunnyside (bordering at Northern Boulevard), and Woodside (bordering at 50th Street) 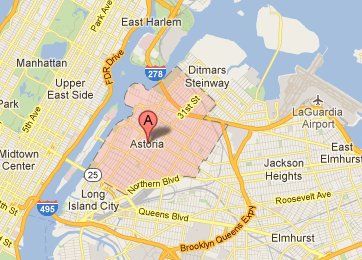 Astoria was formerly called Hallett’s Cove, after its first landowner William Hallett, who settled there in 1659. It was founded in 1839 by fur merchant Steven Halsey and was a noted recreational destination and resort for Manhattan’s wealthy.

Hallett’s Cove was renamed after John Jacob Astor, then the wealthiest man in America, with a net worth of over $40 million, in order to persuade him to invest just $2,000 in the neighborhood. He only invested $500, but the name stayed nonetheless, as a bitter battle over naming the village was finally won by Astor’s supporters and friends.

The New York City Department of Education operates Astoria’s public schools. A complete listing searchable by ZIP code can be found on the Department’s official website.

Astoria also has several private schools, many of which offer parochial education: